DAWN – Dignity For Abused Women in the News

Home / DAWN – Dignity For Abused Women in the News

DAWN is a 2 year long project in partnership with Level Up, funded by The Joseph Rowntree Charitable Trust, focused on the media reporting of domestic violence and abuse. It involves training journalists to understand domestic abuse and supporting a group of survivors to become citizen journalists.

Three women a week are killed by a partner or former partner. Some of these deaths attract media attention and journalists are faced with the challenge of covering a public health issue that is in the public interest, whilst managing an ethical duty toward victims’ families. This project, based on the work of the Dignity for Dead Women‘s press guidelines, was developed by survivors, experts and journalists to ensure domestic abuse deaths are reported with sensitivity, dignity and accuracy.

What is our aim?

Domestic abuse, and fatal domestic abuse (which is where domestic abuse most often makes the news), are public health issues in the UK. Similar to suicide, every article on domestic abuse is an opportunity to help prevent further deaths – but only if written with accuracy and sensitivity. Our long-term aim is for society in general to develop a good understanding of domestic abuse which is influenced by effective and trauma-informed reporting by the media. Better reporting of these issues will result in increased awareness of the dynamics of domestic abuse – increasing the likelihood that those who are experiencing domestic abuse will reach out for help and support.

To get there, we need to improve journalists’ understanding of domestic abuse and give them tools and resources to report on domestic abuse responsibly. In addition, we want to also equip survivors with resources and tools to engage with the media and influence media reporting.

Since the launch of the project, we have run a successful webinar as part of 16 Days of Action against Gender-based Violence See here for a summary of the event.

We will be launching the training package in July 2022, where we will deliver ten free online training sessions over the year to different media outlets, also accompanied by an e-learning package.

The key objectives of the training include an understanding of domestic abuse as being about power and control, as well as highlighting that domestic abuse is a hidden but sadly very pervasive issue. In addition to the training, we use Level Up Guidelines around the acronym ‘First AIDA’ which encourages journalists to consider: Accountability, Images, Dignity, and Accuracy when reporting on domestic abuse and related issues. 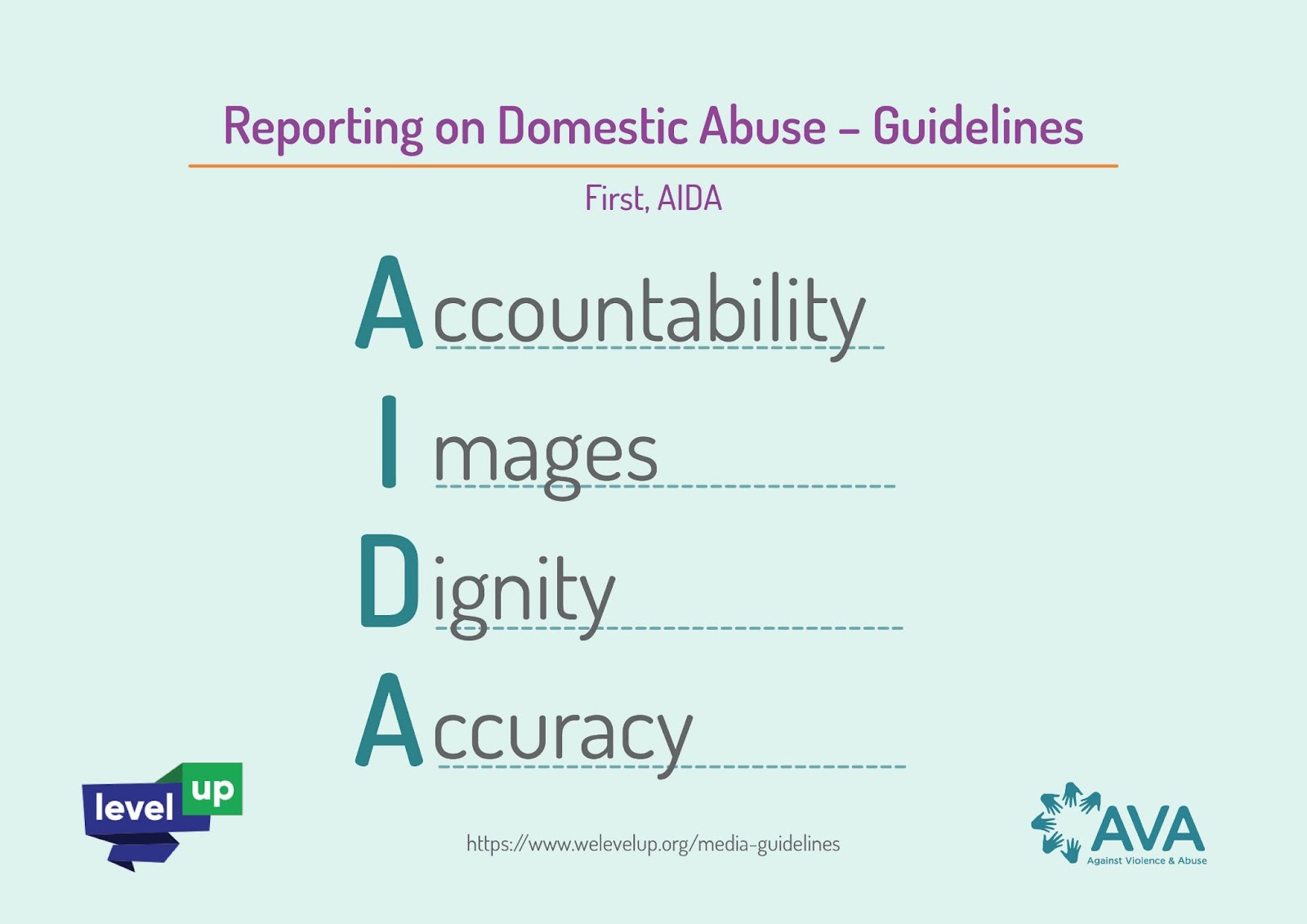 At the end of this training participants will be able to:

You can sign up for yourself or your organisation to join this training from August 2022. For more information, email the Project Manager on: Elaha.Walizadeh@avaproject.org.uk

This training is developed by:

AVA (Against Violence and Abuse): a leading national charity whose vision is a world without gender-based violence. We work with survivors to champion evidence-based change.

Level Up: a feminist campaigning organisation that published the UK’s media guidelines on reporting domestic abuse deaths, which are backed by both press regulators.

Recruiting and training Experts by Experience as citizen journalists

Aside from the training for journalists, the other key strand of the DAWN project is training a group of survivors to become ‘citizen journalists’, supporting them to take back control of the narrative around domestic abuse and violence. AVA has extensive experience in working with survivors in a policy and research context and we want to expand this important work throughout this project to ensure survivors are empowered to challenge media representations of domestic abuse. Many of the survivors we have worked with have expressed a keen interest in addressing the problematic media reporting of domestic abuse in a more systematic way, and this training will support survivors to do this.

RT @MayorofLondon: Male violence against women and girls starts with words. If you see it happening, have a word with yourself—then your…